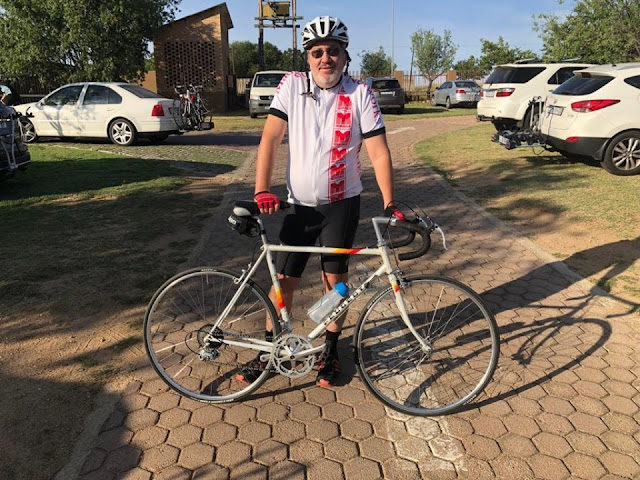 Living in the Cradle of Humankind

Two billion years ago an asteroid streaked into my neighbourhood and created an impact crater stretching two hundred and fifty kilometres across, known as the Vredefort Dome. Today, much of that crater has been eroded and not much is left as evidence except the melted and distorted rocks that indicated the voracity of the event. We lived in blissful ignorance of its existence until around the time I was born when pictures from space provided clues. I live on the edge of that impact crater in an area known as the Witwatersrand. This region has been core to the history of our planet. A region that gained its name from the colour of the water flowing over its northern edges.

This was by far the biggest event in the entire history of the area but there were several other significant events that shaped South Africa, one being the Anglo-Boer war and the years proceeding them. The region was being expanded and the conversion of the main transport from ox-wagon to railway was in progress when gold was discovered in the Witwatersrand. The gold deposits on the edge of asteroid impact zone were available in seams that could be mined. This triggered an attempt by a British imperialist who wanted to expropriate these by force. His name was Cecil John Rhodes who had made a commercial killing from the diamond mining in Kimberly. The attempt was repealed but would be a significant contributing factor to the Anglo-Boer war that followed.

Rhodes became rich mining diamonds in Kimberly. Such was the desire for the stones in this location, that men dug into the earth and created the largest man-made hole. The hole started as a hill and only once every diamond was extracted, did they stop.

Shortly after the Cecil John Rhodes caper to the Witwatersrand, known as The Jamison Raid, the whole continent was struck by an outbreak of the Rinderpest. Large herds of cattle died or were culled, and the railway became a key resource and influence.

Albert Gielink, Herman’s father had holdings of cattle and sugar cane. He lost his herds to the Rinderpest and it impacted him badly even though he had several farms, and the sugar cane crops were still viable. His son Herman would use those farms and supplement them with wattle plantations. Wattle was required as a resultant demand from the expanded mining activities within the Witwatersrand.

However, Albert could not come to terms with the loss of his cattle. He committed suicide in the bedroom of his farmhouse. He slit his own throat and the blood soaked the linen of the bed. His daughter then washed the blood from the linen, and he was buried outside the boundary of the cemetery at the Lilienthal church. The Christians deemed that those who committed suicide were not worthy of being interned in the same cemetery as other members of the congregation.

Herman unexpected death in the car crash occurred after the outbreak of war in the world. The region was relatively unaffected by the war which devastated large parts of Europe but for the so-called Spanish flu that arrived with the returning soldiers from the war caused a crisis. The flu spread rapidly around the country via the rail system which the returning soldiers used to go back home after disembarking at Cape Town. Herman and his family survived the flu which devastated many communities but then succumbed to the horrific train accident. The fact that the two sisters survived, abate with bad injuries was incredible as the car was dragged several hundred yards by the train.

More than a hundred years later we are experiencing another pandemic, COVID. It is having the same devastating consequences on people's lives.

The Witwatersrand region is the most important contributor to humankind. This is the area where humanoids of various species first evolved to create humans. Over three hundred thousand years ago we had humanoids in the grasslands of the area that developed due to an optimal climate, neither too cold nor too hot. There was antelope in abundance with lightning creating spontaneous fires that could be exploited. The antelope herds were millions of creatures large and a herd would take days to pass by a specific location. Hunting was easier than a McDonald’s drive through!

This history would be discovered when the settlers in the Witwatersrand started growing crops to feed the miners who streamed in when gold was discovered. The farms required lime which they mined from accessible caves in the area. Strange bones were discovered but it was only when an Australian anthropologist looked at them that their significance was realized. This discovery happened soon after the traumatic train accident that my grandmother was involved in.

However, the discovery by the Australian anthropologist mentioned above, Raymond Dart was suppressed by one of the biggest instances of scientific fraud ever published. In Britain, a group of individuals conspired to create the fake Piltdown man.  Their inherent bigotry could not process the idea that Europe or even Asia was not the epicentre of the birth of humankind but rather Africa. It would be many decades and only after the Second World War that the Piltdown man hoax was exposed.

In many parts of the world hoax theory is still prevalent over rational thought and this is having been in full and open hysterical progress during the COVID-19 pandemic. In places like the United States the President shunned scientific input and rather supported political expediency. They have also driven an agenda of what is termed as fake news. This labelling has nothing to do with fact but is a blurring of editorial and opinion to discredit legitimised journalism. This is a common totalitarian strategy to discredit major factual based reporting organizations and influence people in a polluted nest of conspiracy theories. The primary example of his distortion is the latest presidential elections in the United States.

In the Witwatersrand we are still discovering important history which includes human ancestors and separate races of humanoids. All these caves and discoveries are all withing cycling distance of my home. I have a yellow Eddy Merckx road bike. I acquired it when I was still at Madge Networks and it has been one of my main bicycles through the years. It accompanies me riding round the Cradle of Humankind.

Eddy Merckx is a Belgian considered to be the greatest pro-cyclist ever and was born as the Second World War was being wrapped up. He sells his own line of bicycles and I mine is a prized position. It dominated and won the Argus Cycle tour in the year following democracy in South Africa. He is one of my heroes and his never-equalled domination while cycling led to his nickname, when the daughter of one French racer said, “That Belgian guy, he doesn’t even leave you the crumbs. He’s a real cannibal.” The French magazine Vélo described Merckx as “the most accomplished rider that cycling has ever known.” Merckx, who turned professional in before I was born, won the World Championship thrice, the Tour de France and Giro d’Italia five times each, and the Vuelta a España once.

South Africa is full of quirks. In the middle of our winter, along the east coast we have a sardine run. It occurs from May through July when billions of sardines – or more specifically the Southern African pilchard Sardinops sagax – spawns in the cool waters of the Agulhas Bank and move northward along the east coast. Their sheer numbers create a feeding frenzy along the coastline. Why? No-one knows. When we do it will be like looking at those pictures of the Vredefort Dome from space? My dad told me that many people its life lived that way. They never saw the bigger picture. They are picking at the bones and miss seeing the skeleton. He would say this when we discussed my deviant cousin’s Christian beliefs.

Along the same coast we have the Coelacanth, commonly known as olde four legs. This the most ancient of fish is still alive on planet Earth. It lives at great depths and was assumed to have become extinct 65 million years ago. Then year my mom was born this South African popped out of the depths to tell us different.

In the minds of some extreme Christian there is a belief of creation based on biblical interpretations of Genesis, which assume we have only been around seven thousand years. This is one of the fundamental beliefs of the Kwasizbantu cult. Notwithstanding our existences as humanoid based life in this area of the Witwatersrand for three hundred thousand years and the legacy of the millions of years of the Coelacanth, and the billions of years of the Vredefort Dome, there are those groups of fundamentalist Christians who disparage it as fake. This is a view not based on scientific observation or deductive reasoning but irrational belief. I am not a part of the Christian grouping and yet even though I have an affinity for the tradition and moral messaging, I always feel alienated as a result. The binary decisions to be called a Christian based on myths are unpalatable as invariable any admittance to acceptable of rational science is viewed as being a heretic.

I am a heretic.

This article was previously published over on LinkedIn:  In the beginning