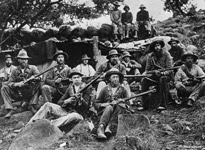 
"We woke with the falling of the dew and, as the sky lightened, gazed eagerly at the dim outline of the hill above, but could make out no sign of life. Gradually the dawn came and still there was no movement. Then to our utter surprise we saw two men on the top triumphantly waving their hats and holding their rifles aloft. They were Boers and their presence their was proof that, almost unbelievably, defeat had turned to victory - the English were gone and the hill was still ours. Leaving our horses to fend for themselves we were soon hastening up the slope past the dead until we reached yesterday's bloody ledge. From here we hurried across to the English breastworks to find them abandoned. On our side of the fighting-line there had been many casualties, but a worse sight met our eyes. In the shallow trenches where they had fought the soldiers lay dead in swathes and in places they were piled three deep. "


"Colaine was taken to a little smithy behind the dwelling house, and when I looked in I saw him and the clergyman kneeling side by side deep in prayer. We sent some Hottentot servants to dig a grave out of the sight of the house, to spare the feelings of its inmates, and, ordering three men who had off-saddled in the garden to fetch their rifles, we went to the workshop door. The clergyman touched the kneeling man on the shoulder and said 'Brother be a man, your time has come.' Colaine took the news calmly; he rose from his knees, shook the parson by the hand, and bidding goodbye to the guards, said that he was ready.


We led him to where the grave was being dug. He said he knew he deserved to die, but he was a poor man, and had taken blood-money to keep his wife and children from starving. The Hottentots were just completing the grave when we came up, and the unfortunate man blanched when he looked into the shallow pit. Perhaps he had still hoped for a reprieve until he saw it. We thought that the sooner it was over the better, so de Wet blindfolded him and placed him at the head of the grave.


Realizing this was the end, Colaine held up his hands and in a low tone recited the Lord's Prayer while the firing party silently ranged themselves. As he came to the final Amen they fired. With a convulsive jerk he pitched backward into the grave and the frightened Hottentots quickly covered him with earth."
GreyBom