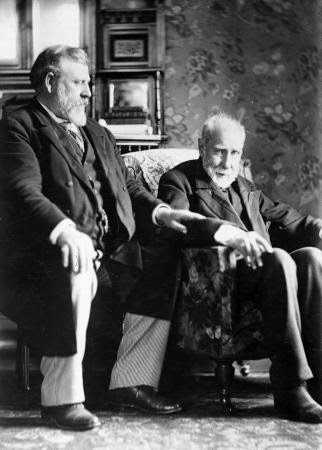 Richard John Seddon (left) was photographed with George Grey in London in 1896, towards the end of Grey's life.

Reference: "In 1879 Seddon stood again for Hokitika and this time was elected. He later claimed his decision to stand was influenced by an exchange of telegrams between himself and Sir George Grey, who was then premier. The story went that Seddon asked Grey whom he wished to see standing, and Grey replied, 'You are worthy; stand yourself'. However, there is no contemporary evidence for the sending of these telegrams. Indeed, Grey is reported to have commended another of the candidates. It may have been a story that Seddon later invented, or he may have read back into the situation in 1879 what actually did happen in 1893, when he secured the premiership.
As a new member of Parliament, Seddon was a Greyite or 'Greyhound' and - for possibly the only time in his political career - called himself a radical. Later, especially in the succession crisis of 1893, he propagated the myth of his affinity with Grey to strengthen his own claims to the Liberal leadership. Yet he was by no means always an uncritical supporter of Grey. He opposed making Grey opposition leader in 1880 and was highly critical of his political manoeuvring in 1884."
Pupils who attended Grey College are referred to as Greybrakke. Brak is the Afrikaans word for dog (or hound). As can be seen the above refers to a Seddon who was a 'Greyhound' (or Greybrak).